Before I go any further with the First War of Independence; I will note that the histography (i.e. an interactive timeline) is incomplete due to lack of unbiased sources and an unclear understanding of Shona and Ndebele religious and cutural practices. I will endeavour to give an unbiased narrative here.

Unlike many accounts, that detail the backward nature of the African societies prior to the settlement of the Europeans under the British South Africa Company flag; I will say that the African societies were complex, with their own political, social and economic systems. These systems had been working perfectly evidenced by the empires that rose and fell in the region. The institutions, however unofficial in the eyes of the settlers; were complicated, dynamic and worth defending and preserving.

The First Chimurenga was a demonstration of early African resistance movements. First Chimurenga (First War of Independence), refers to the 1896-1897 Shona-Nedebele revolt against the British South Africa Company in the area.

Some sources say that the revolt was a complex struggle over land, cattle and taxes. These sources note that this revolt was in no way a planned, coordinated or cohesive uprising aimed at overthrowing the whites. To be honest, neither the whites nor the native Africans were united. The Shona and Ndebele tribes were dispersed and were internally divided. They relied heavily on land and cattle as primary commodities.

When the settlers came in greater numbers, cattle and land was ‘stolen’ from the natives and a hut tax imposed so the people were forced into labour. Some natives benefitted from the new system and cooperated with the settlers whilst others were oppressed and became increasily disgruntled. The British South Africa Company (BSAC) would not acknowledge the grievances of the locals and their reasons to rise up against them. The revolt on the native Africans side was heavily influenced by Spirit Mediums and the Mwari Religion.

The revolt began in Matabeleland. Mlimo, the Ndebele spirit medium is the primary instigator in ramping up the anger amonst the people that led to the uprising.Mlimo was viewed as a superstition by the settlers. Mlimo convinced the people that the settlers were responsible for the drought, locust plagues and rinderpest (cattle disease), that riddled the region. The natives viewed these problems as a result of the settlers not making peace with the land or accomodating Mwari and so the region (and everyone in it),  had been severely punished for this.

Around the same time, Leander Jameson, a BSAC administrator had embarked on the ill fated Jameson Raid in the Transvaal Republic. This had left the settlers with weakened defences. In March 1896, the Ndebele revolted. The Shona (Zezuru) followed soon after in June, led by Mashaykuma. Revolts broke out in the three areas where Mwari shrines were influential.

The settlers viewed the revolt as irrational, a hysterical reaction rooted in superstition and had never considered the possibility of violent uprisings. They were taken by surprise. (End of Part 1)

I cannot end part 1 narrative of the First Chimurenga without noting that spirit mediums were important and played an integral part in both Ndebele and Shona cultures. They stabilized the society and legitimised leadership and rule through rituals. Nehanda was pivotal in unifying the people. But at this juncture, to remain unbiased I must note that the exact importance of Nehanda, Kaguvi and Mlimo differs according to who is narrating. In the eyes of the settler, they were inconsequential; in the eyes of the natives, their role was pivotal.

Next History Monday, I shall continue with my narative of the First War of Independence. 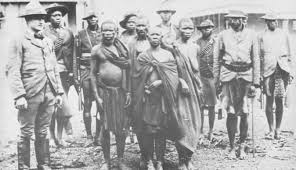