Now this period in the country’s history seems to wrought with many versions of what exactly transpired. However, I shall endeavour to give as accurate an account as I can.

In April of 1979 a general election was held under the internal settlement that had been negotiated by Ian Smith and was intended to provide a transitional period to majority rule without harming the rights of white Rhodesians. This was greatly disputed internationally. The parliament was to be made up of 100 MPs 20 from the old parliament (due to the income, education and property qualifications that most black African could not meet) and 72 from the common roll (voting). Once these 92 were in place they would vote for 8 non constituency White members (all having to be members of Rhodesian Front Party). Hence there were days of election; one for the ‘white roll’ on 10 April 1979 and the ‘ common roll’ on 21 April 1979.  ZANU and ZAPU pledged to disrupt and not participate in these elections and called for a boycott of its members and supporters.  Attacks continued from ZANLA and ZIPRA forces.

The United Nations Security Council passed several resolutions against the illegal elections citing they were not representative of the Zimbabwean people and designed to ensure white minority rule hence the elections were declared null and void. Several MPs were killed during this time T C de Klerk of RF was killed in a rocket attack of his home on 20 September 1979, T Mashambanhaka of UANC was lured into an ambush and murdered on 16 September 1979.

On September 10 1979, the British Government met representatives from various groups from Rhodesia to broker a settlement for peace. By December of the same year, the British Governor Lord Soames arrived in Salisbury (now Harare) to administer the country. The agreement was signed on 21 December 1979 paving the way for ceasefire, transitional British Rule till free and fair elections are held, a new consultation implementing majority rule whilst protecting minority rights.

After the Lancaster House Agreement, Mugabe shifted his nationalist attitude, Marxist and Socialist expressions  to one of reconciliation and peace in the country. This strategy worked with many Shona people; majority low and middle class turning out to register and vote.

The elections were held in February 1980 and we’re won by Robert Mugabe’s ZANU. The country was proclaimed the Republic of Zimbabwe in 18 April 1980 with Mugabe sworn in as Prime Minister.

The new government took representatives from all primary parties including Joshua Nkomo and two white Members of Parliament. This gave all hope that Mugabe was leading the country to a time of true national reconciliation as a nation united under the flag of the Republic of Zimbabwe. 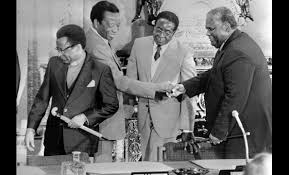