Zimbabwe is home to one of the most stunning historical monuments in Africa – the monument of the Great Zimbabwe.  Built 900 years ago, the massive stone structures of the Great Zimbabwe create a breathtaking view, leaving visitors to wonder about the historical events that transpired many centuries ago. How were these massive stone structures built? What kind of society lived here? Why was such an impressive and durable structure ultimately abandoned?

The name ‘Zimbabwe’ is an anglicized form of an African word meaning ‘stone houses’, for the ruins of the Great Zimbabwe are comprised of several stone walls, monuments, and buildings built mainly of granite. The structures were created using a method called dry stonewalling, which requires a high level of masonry expertise. The internal structure contains many passageways and enclosures. It spans almost 1800 acres of the southeastern area of the country of Zimbabwe. While it may seem that the structure was named after the country, it is actually the other way around.

It is estimated that construction spanned more than 300 years, and that the complexes housed a civilization of up to 18,000 people. The Great Zimbabwe would have been used as a political seat of power, serving as a palace for the Zimbabwean monarch. It is not known who constructed the Great Zimbabwe, but there are several groups that may have been involved, including the Bantu people of the Gokomere, ancestors of the Southern African ethnic group known as the Lemba or Venda, or a branch of the Shona-speaking people known as the Karanga. 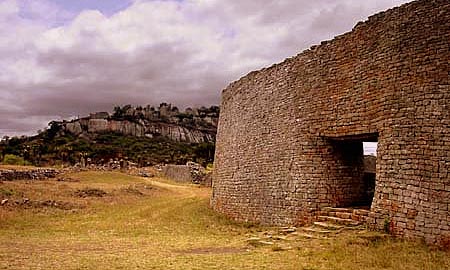 The Great Zimbabwe was ultimately abandoned, with parts of it falling into ruin. However, many of the structures are still standing today, and the site has been recognized as a World Heritage Site by UNESCO. According to some, the most impressive remains of the Great Zimbabwe are the massive stone walls. The walls were constructed of granite; a local natural resource that was collected from the exposed rock in the surrounding hills. The large slabs were easy to remove, transport, and construct, creating an expansive set of walls around the complex. 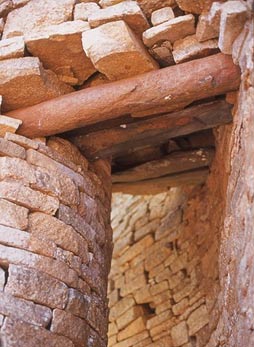 The ruins of the Great Zimbabwe form three distinctive architectural groupings, which have been labeled as the Hill Complex, the Valley Complex, and the Great Enclosure. There is some disagreement as to the meaning or purpose of the three groupings. Some say that each group represents a different king, with new rulers creating a new residence upon taking power. This would suggest that the focus of power shifted throughout the Great Zimbabwe over the centuries. Others suggest that the groupings were used consistently throughout the lifespan of the Great Zimbabwe, with each complex serving a specific purpose within society; the Hill Complex possibly served as a temple, the Valley Complex was where citizens resided, and the Great Enclosure housed the king. 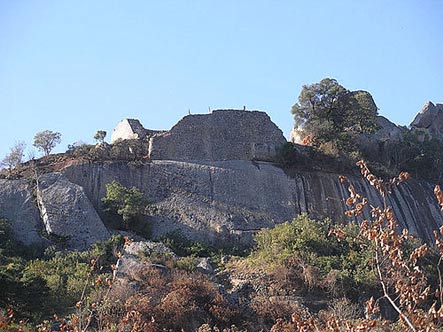 The Hill Complex in the Great Zimbabwe. Image source: Wikipedia

Some evidence of the peoples that inhabited the Great Zimbabwe comes from the artifacts that have been discovered in the area, including soapstone figurines, pottery, iron gongs, elaborately worked ivory, iron and copper wire, iron hoes, bronze spearheads, copper ingots and crucibles, and gold beads, bracelets, pendants and sheaths. One of the most notable artifacts discovered to date is known as the eight Zimbabwe Birds. The birds are 16 inches tall, carved from soapstone and had been placed atop massive stone monoliths that were about a yard tall. Unfortunately, the birds were not discovered in situ, so it is not known where they were placed when constructed. There are some physical indications that the Zimbabwe Birds were placed at the Eastern Enclosure of the Hill Complex. The birds contain both human and bird-like features, including lips for a beak, and five-toed feet for claws. They may have been symbols of a royal presence. Determining exactly where the birds were located could provide insight as to where the king or leader lived within the Great Zimbabwe.

Copy of one of the soapstone birds found at the Great Zimbabwe. Image source: Wikipedia

There has been much speculation as to what led to the decline of the inhabitants of the Great Zimbabwe, mostly adducing to a decline in available resources. Some say it may have been due to declines in trade from the North, or exhaustion of the resources in the nearby gold mines. Others cite political unrest, famine, and water shortages caused by climate changes, which would have forced the citizens to move to an area with a higher abundance of resources available.

The Great Zimbabwe give visitors a glimpse into the landscape of past human civilization, but it remains a great enigma. So much is still unknown about the ancient site – how it came to be, why it was built, how it was used, and why it was abandoned. We may never know the answers to these questions, but we can still marvel at the breathtaking ruins that gave the country of Zimbabwe its name.