The Culture of Zimbabwe Part 1

Support for the Arts. Artists are held in high regard. In Harare and Bulawayo and to a lesser extent in rural areas, there are many training centers. Some of those centers are self-run, started with the assistance of a patron; some are run by nongovernmental organizations; and some are cooperatives. The most famous is Tengenenge in Guruve District, which has produced many of the most famous Shona sculptors. The National Gallery in Harare, founded in 1954, has been instrumental in the promotion of art, especially sculpture. Competition is high, especially in the sculpture and women’s traditional craft markets (baskets, mats, and pottery).

Literature. The first Shona novel was published in 1956, and the first Ndebele one in 1957. Since that time, especially after independence, there has been a burgeoning of Shona and Ndebele literature. Major themes are folklore, myths and legends (traditional 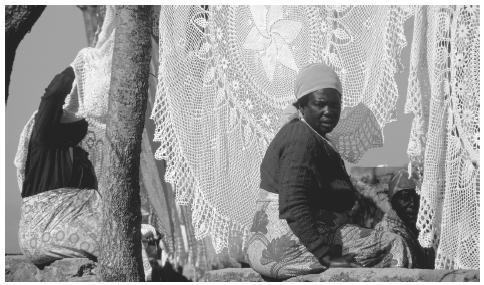 A woman selling crocheted tablecloths in Harare. Many enterprises in the informal sector are based on women’s traditional activities.

oral literature), the preindependence experience and struggle, and living in a postindependent country. Internationally acclaimed novelists include Shimmer Chinyodya (Harvest of Thorns) Chenjerai Hove (Bones, Shadows) , and Doris Lessing (the Martha Quest trilogy and her autobiographies), who is the most famous white writer. An international book fair is held in Harare every August.

Graphic Arts. Shona sculpture is internationally acclaimed and exhibited. Those works fetch thousands of dollars on the international market, particularly in Europe and the United States. Although this art form is referred to as Shona sculpture, it is not specific to the Shona. The themes are derived largely from African folklore and transformed into figurative, semiabstract, and minimalist works that use a variety of stone, including black serpentine.

Performance Arts. Traditionally inspired music is predominant in the arts and represents cultural continuity with the past. Based on the rhythms and melodies of the mbira (finger piano), the instrument associated with the ancestors, traditional music promoted a feeling of solidarity in the struggle for independence. Music groups were formed in urban areas, lyrics contained political messages, and the music scene promoted African rather than European figures. Since 1980, the number of cultural groups has increased and public performances have become common. The ready availability of radios has not replaced playing music (usually the mbira or drums) in the home. Thomas Mapfuma and the Blacks Unlimited group are the most well-known proponents of popular music heavily influenced by traditional music. Other influences on popular music include church music, gospel, Zairean rhumba, and South African mbaqanga and mbube. Black Umfolosi exemplifies the mbubu tradition of Nguni vocals and harmony sung a capella.

Older people have a greater affinity with traditional music, but all Zimbabwean music is influenced by the rhythms and melodies of the mbira . Western music is popular, and artists are influenced by it to varying degrees.

Several Zimbabwean films have been commercially successful, including Flame, Jit, Everyone’s Child, and Neria . Flame has a political focus, and the other three have social themes.