The Mosi-oa-Tunya/Victoria Falls is the world’s greatest sheet of falling water and significant worldwide for its exceptional geological and geomorphological features and active land formation processes with outstanding beauty attributed to the falls i.e. the spray, mist and rainbows. This transboundary property extends over 6860 ha and comprises 3779 ha of the Mosi-oa-Tunya National Park (Zambia), 2340 ha of Victoria Falls National Park (Zimbabwe), 741 ha of the riverine strip of Zambezi National Park (Zimbabwe). A riverine strip of the Zambezi National Park extending 9 km west along the right bank of the Zambezi and islands in the river are all within the Park as far as Palm and Kandahar Islands, with the Victoria Falls being one of the major attractions. The waterfall stands at an altitude of about 915 m above mean sea level (a.m.s.l.) and spans to about 1708 m wide with an average depth of 100 m and the deepest point being 108 m. Sprays from this giant waterfall can be seen from a distance of 30 km from the Lusaka road, Zambia and 50 km from Bulawayo road, Zimbabwe. Basalts have been cut by a river system producing a series of eight spectacular gorges that serve as breeding sites for four species of endangered birds. The basalts of the Victoria Falls World Heritage property are layered unlike those of the Giants Causeway World Heritage site which are vertical and columnar.

Criterion (vii): The Mosi-oa-Tunya/Victoria Falls is the largest curtain of falling water in the world; it is 1708 m wide and with up to 500 million litres per minute descending at 61 m (Devil’s Cataract), 83 m (Main Falls), 99 m (Rainbow Falls), 98 m (Eastern Cataract). Eight spectacular gorges of igneous origin (i.e. comprising basalts) and several islands in the core zone serve as breeding sites for four endangered and migratory bird species, such as the Taita Falcon and Black Eagle. The riverine ‘rainforest’ within the waterfall splash zone is a fragile ecosystem of discontinuous forest on sandy alluvium, dependent upon maintenance of abundant water and high humidity resulting from the spray plume of about 500 m (at maximum height) that can be seen from a distance of 50 km and 30 km from Bulawayo and Lusaka roads respectively. A direct frontage viewing of the falls is possible from both Zambia and Zimbabwe.

Criterion (viii): The Mosi-oa-Tunya/Victoria Falls and associated eight steep sided gorges have been formed through the changing waterfall positions over a geological time scale. The gorges are an outstanding example of river capture and the erosive forces of the water still continue to sculpture the hard basalts. These gorges take a zigzag course of a distance of about 150 km along the Zambezi River below the falls. Seven previous waterfalls occupied the seven gorges below the present falls, and the Devil’s Cataract in Zimbabwe is the starting point for cutting back to a new waterfall. In addition, an aerial view of the falls shows possible future waterfall positions. Upstream are a spectacular series of riverine islands formed during the ongoing geological and geomorphological processes. The property is characterized by banded basalt of ancient lava flow, Kalahari sandstones and chalcedony out of which stone artefacts of Homo habilis dating three million years, stone tools of the middle Stone Age and weapons, adornments and digging tools of the late Stone Age that indicate occupation by hunter-gatherers.

The transboundary property extends over 6860 ha, which is considered relatively intact and adequately sized to maintain the diverse natural processes, functions and interactions including the waterfall, gorges, riverine ecosystem, breeding ground, habitat or landing base for migratory endangered bird species making it an Important Bird Area (IBA), lava flows, ancient stone artefacts and tools for hunter-gatherers. It comprises 3779 ha of the Mosi-oa-Tunya National Park (Zambia), 2340 ha of the Victoria Falls National Park (Zimbabwe), and 741 ha of the riverine strip of Zambezi National Park (Zimbabwe). The boundary includes areas of the Zambezi River upstream of the waterfall both in Zimbabwe and in Zambia. The remaining area of these protected areas is considered as the buffer zone on either side of the Zambezi River in Southern Zambia and north‐western Zimbabwe. The Mosi‐oa‐Tunya National Park boundary follows the left bank between the Sinde River and the Songwe Gorge, bounded in the North by Dambwa Forest Reserve and the Maramba Township. On the right bank, the Victoria Falls National Park is bounded by the river from 6 km above to 12 km below the falls and by the town of Victoria Falls on the West. Sprays from this giant waterfall can be seen from a distance of 30 km from the Lusaka road, Zambia and 50 km from Bulawayo road, Zimbabwe. The system is directly bordered by three protected areas which serve as buffering system. 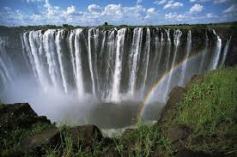