In early July 1888, Rhodes returned from London and met with Robinson, proposing the establishment of a chartered company to govern and develop south-central Africa, with himself at its head, and similar powers to the British North Borneo, Imperial British East Africa and Royal Niger Companies. Rhodes said that this company would take control of those parts of Matabeleland and Mashonaland “not in use” by the local people, demarcate reserved areas for the indigenous population, and thereafter defend both, while developing the lands not reserved for natives. In this way, he concluded, Matabele and Mashona interests would be protected, and south-central Africa would be developed, all without a penny from Her Majesty’s Treasury. Robinson wrote to Knutsford on 21 July that he thought Whitehall should back this idea; he surmised that the Boers would receive British expansion into the Zambezi–Limpopo watershed better if it came in the form of a chartered company than if it occurred with the creation of a new Crown colony. He furthermore wrote a letter for Rudd’s party to carry to Bulawayo, recommending Rudd and his companions to Lobengula. 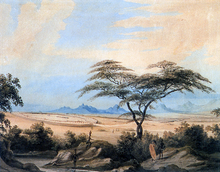 A Matabele kraal, as depicted by William Cornwallis Harris, 1836

Maund left Kimberley in July, well ahead of the Rudd party. Rudd’s negotiating team, armed with Robinson’s endorsement, was still far from ready—they left Kimberley only on 15 August—but Moffat, travelling from Shoshong in Bechuanaland, was ahead of both expeditions. He reached Bulawayo in late August to find the kraal filled with white concession-hunters. The various bidders attempted to woo the king with a series of gifts and favours, but won little to show for it.

Between Kimberley and Mafeking, Maund learned from Shippard that Grobler had been killed by a group of Ngwato warriors while returning to the Transvaal, and that the Boers were threatening to attack the British-protected Ngwato chief, Khama III, in response. Maund volunteered to help defend Khama, writing a letter to his employers explaining that doing so might lay the foundations for a concession from Khama covering territory that the Matabele and Ngwato disputed. Cawston tersely wrote back with orders to make for Bulawayo without delay, but over a month had passed in the time this written exchange required, and Maund had squandered his head start on Rudd. After ignoring a notice Lobengula had posted at Tati, barring entry to white big-game hunters and concession-seekers, the Rudd party arrived at the king’s kraal on 21 September 1888, three weeks ahead of Maund.

Rudd, Thompson and Maguire immediately went to present themselves to Lobengula, who came out from his private quarters without hesitation and politely greeted the visitors. Through a Sindebele interpreter, Rudd introduced himself and the others, explained on whose behalf they acted, said they had come for an amiable sojourn, and presented the king with a gift of £100.

After the subject of business was eschewed for a few days, Thompson explained to the king in Setswana what he and his confederates had come to talk about. He said that his backers, unlike the Transvaalers, were not seeking land, but only wanted to mine gold in the Zambezi–Limpopo watershed. During the following weeks, talks took place sporadically. Moffat, who had remained in Bulawayo, was occasionally called upon by the king for advice, prompting the missionary to subtly assist Rudd’s team through his counsel. He urged Lobengula to work alongside one large entity rather than many small concerns, telling him that this would make the issue easier for him to manage. He then informed the king that Shippard was going to pay an official visit during October, and advised him not to make a decision until after this was over.

Accompanied by Sir Hamilton Goold-Adams and 16 policemen, Shippard arrived in mid-October 1888. The king suspended concession negotiations in favour of meetings with him. The colonial official told the king that the Boers were hungry for more land and intended to overrun his country before too long; he also championed Rudd’s cause, telling Lobengula that Rudd’s team acted on behalf of a powerful, financially formidable organisation supported by Queen Victoria. Meanwhile, Rhodes sent a number of letters to Rudd, warning him that Maund was his main rival, and that because the London syndicate’s goals overlapped so closely with their own, it was essential that Cawston and Gifford be defeated or else brought into the Rhodes camp. Regarding Lobengula, Rhodes advised Rudd to make the king think that the concession would work for him. “Offer a steamboat on the Zambezi same as [Henry Morton] Stanley put on the Upper Congo … Stick to Home Rule and Matabeleland for the Matabele[,] I am sure it is the ticket.”

As October passed without major headway, Rudd grew anxious to return to the Witswatersrand gold mines, but Rhodes insisted that he could not leave Bulawayo without the concession. “You must not leave a vacuum,” Rhodes instructed. “Leave Thompson and Maguire if necessary or wait until I can join … if we get anything we must always have someone resident”. Thus prevented from leaving, Rudd vigorously tried to persuade Lobengula to enter direct negotiations with him over a concession, but was repeatedly rebuffed. The king only agreed to look at the draft document, mostly written by Rudd, just before Shippard was due to leave in late October. At this meeting, Lobengula discussed the terms with Rudd for over an hour. Charles Helm, a missionary based in the vicinity, was summoned by the king to act as an interpreter. According to Helm, Rudd made a number of oral promises to Lobengula that were not in the written document, including “that they would not bring more than 10 white men to work in his country, that they would not dig anywhere near towns, etc., and that they and their people would abide by the laws of his country and in fact be his people.”

After these talks with Rudd, Lobengula called an indaba (conference) of over 100 izinDuna to present the proposed concession terms to them and gauge their sympathies. It soon became clear that opinion was split: most of the younger izinDuna were opposed to the idea of any concession whatsoever, while the king himself and many of his older izinDuna were open to considering Rudd’s bid. The idea of a mining monopoly in the hands of Rudd’s powerful backers was attractive to the Matabele in some ways, as it would end the incessant propositioning for concessions by small-time prospectors, but there was also a case for allowing competition to continue, so that the rival miners would have to compete for Lobengula’s favour.

Martini–Henry rifles. Rudd’s offer of 1,000 of these weapons, along with appropriate ammunition, proved key in persuading Lobengula to grant the concession.

For many at the indaba, the most pressing motivator was Matabeleland’s security. While Lobengula considered the Transvaalers more formidable battlefield adversaries than the British, he understood that Britain was more prominent on the world stage, and while the Boers wanted land, Rudd’s party claimed to be interested only in mining and trading. Lobengula reasoned that if he accepted Rudd’s proposals, he would keep his land, and the British would be obliged to protect him from incursions by the Boers.

Rudd was offering generous terms that few competitors could hope to even come close to. If Lobengula agreed, Rudd’s backers would furnish the king with 1,000 Martini–Henry breech-loading rifles, 100,000 rounds of matching ammunition, a steamboat on the Zambezi (or, if Lobengula preferred, a lump sum of £500), and £100 a month in perpetuity. More impressive to the king than the financial aspects of this offer were the weapons: he had at the time between 600 and 800 rifles and carbines, but almost no ammunition for them. The proposed arrangement would lavishly stock his arsenal with both firearms and bullets, which might prove decisive in the event of conflict with the South African Republic. The weapons might also help him keep control of the more rambunctious factions amid his own impis. Lobengula had Helm go over the document with him several times, in great detail, to ensure that he properly understood what was written. None of Rudd’s alleged oral conditions were in the concession document, making them legally unenforceable (presuming they indeed existed), but the king apparently regarded them as part of the proposed agreement nonetheless.

The final round of negotiations started at the royal kraal on the morning of 30 October. The talks took place at an indaba between the izinDuna and Rudd’s party; the king himself did not attend, but was nearby. The izinDuna pressed Rudd and his companions as to where exactly they planned to mine, to which they replied that they wanted rights covering “the whole country”. When the izinDuna demurred, Thompson insisted, “No, we must have Mashonaland, and right up to the Zambezi as well—in fact, the whole country”. According to Thompson’s account, this provoked confusion among the izinDuna, who did not seem to know where these places were. “The Zambezi must be there”, said one, incorrectly pointing south (rather than north). The Matabele representatives then prolonged the talks through “procrastination and displays of geographical ignorance”, in the phrase of the historian Arthur Keppel-Jones, until Rudd and Thompson announced that they were done talking and rose to leave. The izinDuna were somewhat alarmed by this and asked the visitors to please stay and continue, which they did. It was then agreed that inDuna Lotshe and Thompson would together report the day’s progress to the king.