After speaking with Lotshe and Thompson, the king was still hesitant to make a decision. Thompson appealed to Lobengula with a rhetorical question: “Who gives a man an assegai [spear] if he expects to be attacked by him afterwards?” Seeing the allusion to the offered Martini–Henry rifles, Lobengula was swayed by this logic, and made up his mind to grant the concession. “Bring me the fly-blown paper and I will sign it,” he said. Thompson briefly left the room to call Rudd, Maguire, Helm and Dreyer in, and they sat in a semi-circle around the king. Lobengula then put his mark to the concession, which read:

Know all men by these presents, that whereas Charles Dunell Rudd, of Kimberley; Rochfort Maguire, of London; and Francis Robert Thompson, of Kimberley, hereinafter called the grantees, have covenanted and agreed, and do hereby covenant and agree, to pay to me, my heirs and successors, the sum of one hundred pounds sterling, British currency, on the first day of every lunar month; and further, to deliver at my royal kraal one thousand Martini–Henry breech-loading rifles, together with one hundred thousand rounds of suitable ball cartridge, five hundred of the said rifles and fifty thousand of the said cartridges to be ordered from England forthwith and delivered with reasonable despatch, and the remainder of the said rifles and cartridges to be delivered as soon as the said grantees shall have commenced to work mining machinery within my territory; and further, to deliver on the Zambesi River a steamboat with guns suitable for defensive purposes upon the said river, or in lieu of the said steamboat, should I so elect, to pay to me the sum of five hundred pounds sterling, British currency. On the execution of these presents, I, Lobengula, King of Matabeleland, Mashonaland, and other adjoining territories, in exercise of my sovereign powers, and in the presence and with the consent of my council of indunas, do hereby grant and assign unto the said grantees, their heirs, representatives, and assigns, jointly and severally, the complete and exclusive charge over all metals and minerals situated and contained in my kingdoms, principalities, and dominions, together with full power to do all things that they may deem necessary to win and procure the same, and to hold, collect, and enjoy the profits and revenues, if any, derivable from the said metals and minerals, subject to the aforesaid payment; and whereas I have been much molested of late by divers persons seeking and desiring to obtain grants and concessions of land and mining rights in my territories, I do hereby authorise the said grantees, their heirs, representatives and assigns, to take all necessary and lawful steps to exclude from my kingdom, principalities, and dominions all persons seeking land, metals, minerals, or mining rights therein, and I do hereby undertake to render them all such needful assistance as they may from time to time require for the exclusion of such persons, and to grant no concessions of land or mining rights from and after this date without their consent and concurrence; provided that, if at any time the said monthly payment of one hundred pounds shall be in arrear for a period of three months, then this grant shall cease and determine from the date of the last-made payment; and further provided that nothing contained in these presents shall extend to or affect a grant made by me of certain mining rights in a portion of my territory south of the Ramaquaban River, which grant is commonly known as the Tati Concession.

As Lobengula inscribed his mark at the foot of the paper, Maguire turned to Thompson and said “Thompson, this is the epoch of our lives.” Once Rudd, Maguire and Thompson had signed the concession, Helm and Dreyer added their signatures as witnesses, and Helm wrote an endorsement beside the terms: I hereby certify that the accompanying document has been fully interpreted and explained by me to the Chief Lobengula and his full Council of Indunas and that all the Constitutional usages of the Matabele Nation had been complied with prior to his executing the same.

Lobengula refused to allow any of the izinDuna to sign the document. Exactly why he did this is not clear. Rudd’s interpretation was that the king considered them to have already been consulted at the day’s indaba, and so did not think it necessary for them to also sign. Keppel-Jones comments that Lobengula might have felt that it would be harder to repudiate the document later if it bore the marks of his izinDuna alongside his own.

Within hours, Rudd and Dreyer were hurrying south to present the document to Rhodes, travelling by mule cart, the fastest mode of transport available. Thompson and Maguire stayed in Bulawayo to defend the concession against potential challenges. Rudd reached Kimberley and Rhodes on 19 November 1888, a mere 20 days after the document’s signing, and commented with great satisfaction that this marked a record that would surely not be broken until the railway was laid into the interior. Rhodes was elated by Rudd’s results, describing the concession as “so gigantic it is like giving a man the whole of Australia”. Both in high spirits, the pair travelled to Cape Town by train, and presented themselves to Robinson on 21 November.

Robinson was pleased to learn of Rudd’s success. The High Commissioner wanted to gazette the concession immediately, but Rhodes knew that the promise to arm Lobengula with 1,000 Martini–Henrys would be received with apprehension elsewhere in South Africa, especially among Boers; he suggested that this aspect of the concession should be kept quiet until the guns were already in Bechuanaland. Rudd therefore prepared a version of the document omitting mention of the Martini–Henrys, which was approved by Rhodes and Robinson, and published in the Cape Times and Cape Argus newspapers on 24 November 1888. The altered version described the agreed price for the Zambezi–Limpopo mining monopoly as “the valuable consideration of a large monthly payment in cash, a gunboat for defensive purposes on the Zambesi, and other services.” Two days later, the Cape Times printed a notice from Lobengula:

All the mining rights in Matabeleland, Mashonaland and adjoining territories of the Matabele Chief have been already disposed of, and all concession-seekers and speculators are hereby warned that their presence in Matabeleland is obnoxious to the chief and people. But the king was already beginning to receive reports telling him that he had been hoodwinked into “selling his country”. Word abounded in Bulawayo that with the Rudd Concession (as the document became called), Lobengula had signed away far more impressive rights than he had thought. Some of the Matabele began to question the king’s judgement. While the izinDuna looked on anxiously, Moffat questioned whether Lobengula would be able to keep control. Thompson was summoned by the izinDuna and interrogated for over 10 hours before being released; according to Thompson, they were “prepared to suspect even the king himself”. Rumours spread among the kraal’s white residents of a freebooter force in the South African Republic that allegedly intended to invade and support Gambo, a prominent inDuna, in overthrowing and killing Lobengula. Horrified by these developments, Lobengula attempted to secure his position by deflecting blame. InDuna Lotshe, who had supported granting the concession, was condemned for having misled his king and executed, along with his extended family and followers—over 300 men, women and children in all. Meanwhile, Rhodes and Rudd returned to Kimberley, and Robinson wrote to the Colonial Office at Whitehall on 5 December 1888 to inform them of Rudd’s concession. 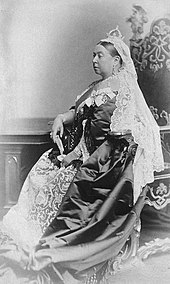 Queen Victoria was referred to by the Matabele as the “White Queen”. Lobengula sent emissaries to meet her with the hope of, among other things, ascertaining her existence.

While reassuring Thompson and Maguire that he was only repudiating the idea that he had given his country away, and not the concession itself (which he told them would be respected), Lobengula asked Maund to accompany two of his izinDuna, Babayane and Mshete, to England, so they could meet Queen Victoria herself, officially to present to her a letter bemoaning Portuguese incursions on eastern Mashonaland, but also unofficially to seek counsel regarding the crisis at Bulawayo. The mission was furthermore motivated by the simple desire of Lobengula and his izinDuna to see if this white queen, whose name the British swore by, really existed. The king’s letter concluded with a request for the Queen to send a representative of her own to Bulawayo. Maund, who saw a second chance to secure his own concession, perhaps even at Rudd’s expense, said he was more than happy to assist, but Lobengula remained cautious with him: when Maund raised the subject of a new concession covering the Mazoe valley, the king replied “Take my men to England for me; and when you return, then I will talk about that.” Johannes Colenbrander, a frontiersman from Natal, was recruited to accompany the Matabele emissaries as an interpreter. They left in mid-December 1888.

Around this time, a group of Austral Africa Company prospectors, led by Alfred Haggard, approached Lobengula’s south-western border, hoping to gain their own Matabeleland mining concession; on learning of this, the king honoured one of the terms of the Rudd Concession by allowing Maguire to go at the head of a Matabele impi to turn Haggard away. While Robinson’s letter to Knutsford made its way to England by sea, the Colonial Secretary learned of the Rudd Concession from Cawston and Gifford. Knutsford wired Robinson on 17 December to ask if there was any truth in what the London syndicate had told him about the agreed transfer of 1,000 Martini–Henrys: “If rifles part of consideration, as reported, do you think there will be danger of complications arising from this?” Robinson replied, again in writing; he enclosed a minute from Shippard in which the Bechuanaland official explained how the concession had come about, and expressed the view that the Matabele were less experienced with rifles than with assegais, so their receipt of such weapons did not in itself make them lethally dangerous. He then argued that it would not be diplomatic to give Khama and other chiefs firearms while withholding them from Lobengula, and that a suitably armed Matabeleland might act as a deterrent against Boer interference.

Surprised by the news of a Matabele mission to London, Rhodes attempted to publicly downplay the credentials of the izinDuna and to stop them from leaving Africa. When the envoys reached Kimberley Rhodes told his close friend, associate and housemate Dr Leander Starr Jameson—who himself held the rank of inDuna, having been so honoured by Lobengula years before as thanks for medical treatment—to invite Maund to their cottage. Maund was suspicious, but came anyway. At the cottage, Rhodes offered Maund financial and professional incentives to defect from the London syndicate. Maund refused, prompting Rhodes to declare furiously that he would have Robinson stop his progress at Cape Town. The izinDuna reached Cape Town in mid-January 1889 to find that it was as Rhodes had said; to delay their departure, Robinson discredited them, Maund and Colenbrander in cables to the Colonial Office in London, saying that Shippard had described Maund as “mendacious” and “dangerous”, Colenbrander as “hopelessly unreliable”, and Babayane and Mshete as not actually izinDuna or even headmen. Cawston forlornly telegraphed Maund that it was pointless to try to go on while Robinson continued in this vein.